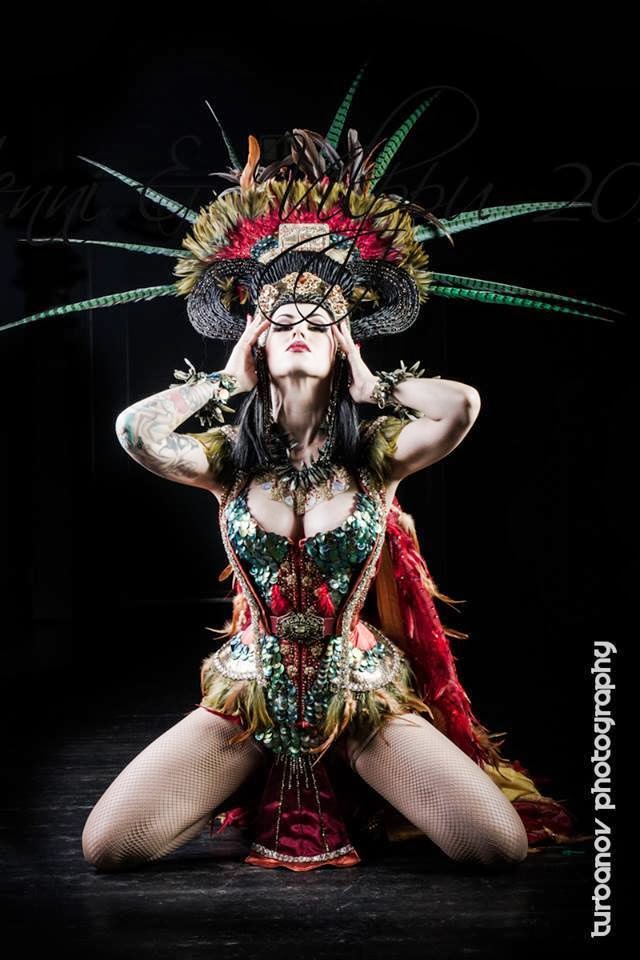 So, many people have been asking about the details of the headpiece i made for LouLou D'vil. And while i'm at it i might as well say something about the prices of my headdresses, since not a week goes by that i don't have to explain to someone why they are "so expencive". But first, about LouLou's headpiece! :) 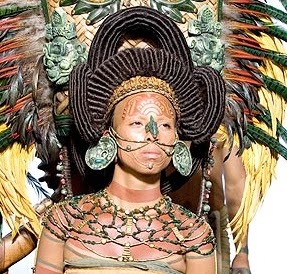 This is the inspiration photo that Loulou gave me (headdress form the movie Apocalypto, costume designer Mayes C. Rubeo) . As You can see we used some of the shapes, like the side rolls and the bun and used some of the same colours (colours that are seen in ancient arwork too). I changed the top, the piece on the forehead and added colour, sparkle and made it darker and more "burlesque" adding tassels, sequins and big glass diamonds. The shape of the base is different too and it's smaller in size. The structure is also probably very different because of the demands for the headpiece i made. 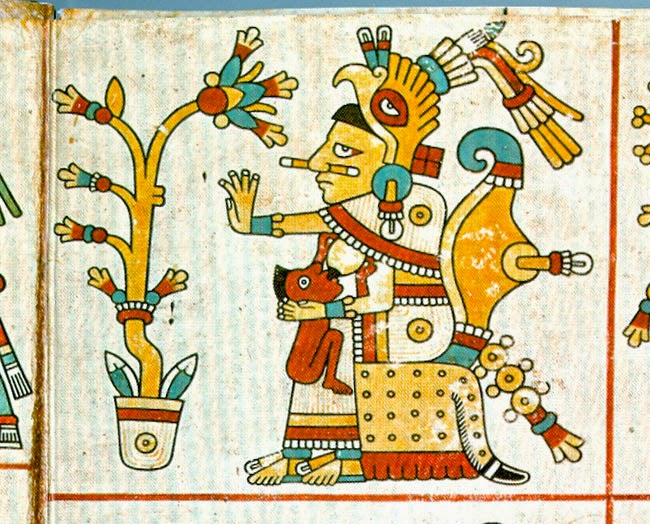 The aztec goddess Xochiquetzal. She incarnated youth, love and beauty and was amorously pursued by several Aztec gods. Emblemised by flowers and colourful feathers, Xochiquetzal was patroness of lovers and prostitutes. Unlike other fertility goddesses, she encouraged love-making as a means of pleasure, not reproduction. 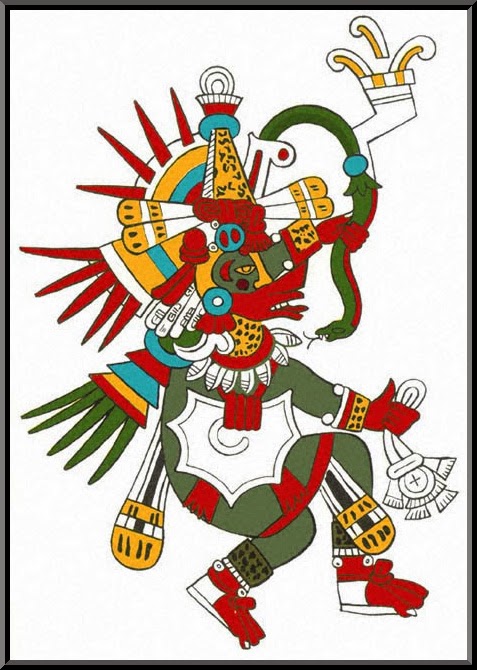 Mayan God Kukulcan, also known as the Serpent God, is the Mayans Supreme God. The Aztec called him Quetzalcoatl. 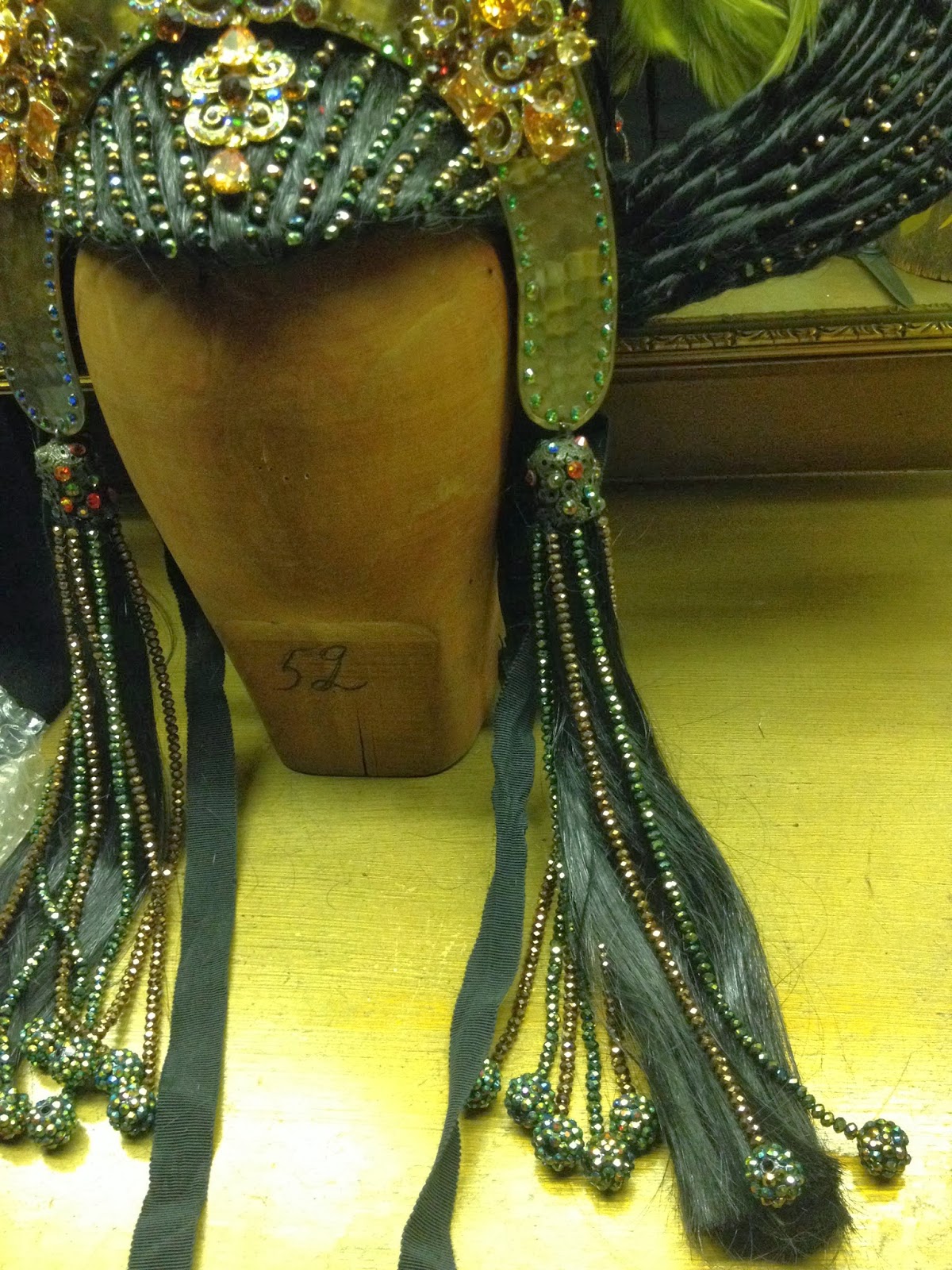 The frame is metal wire, padded and covered. I'm not telling you all my secrets, but i can share some of the details :)

Under the metal frame there is also buckram, there's lot of stuff on it so it needs the support.
The base in the front is covered with black fake hair, since lots of the pics of ancient south american gods and goddesses had "fringes". 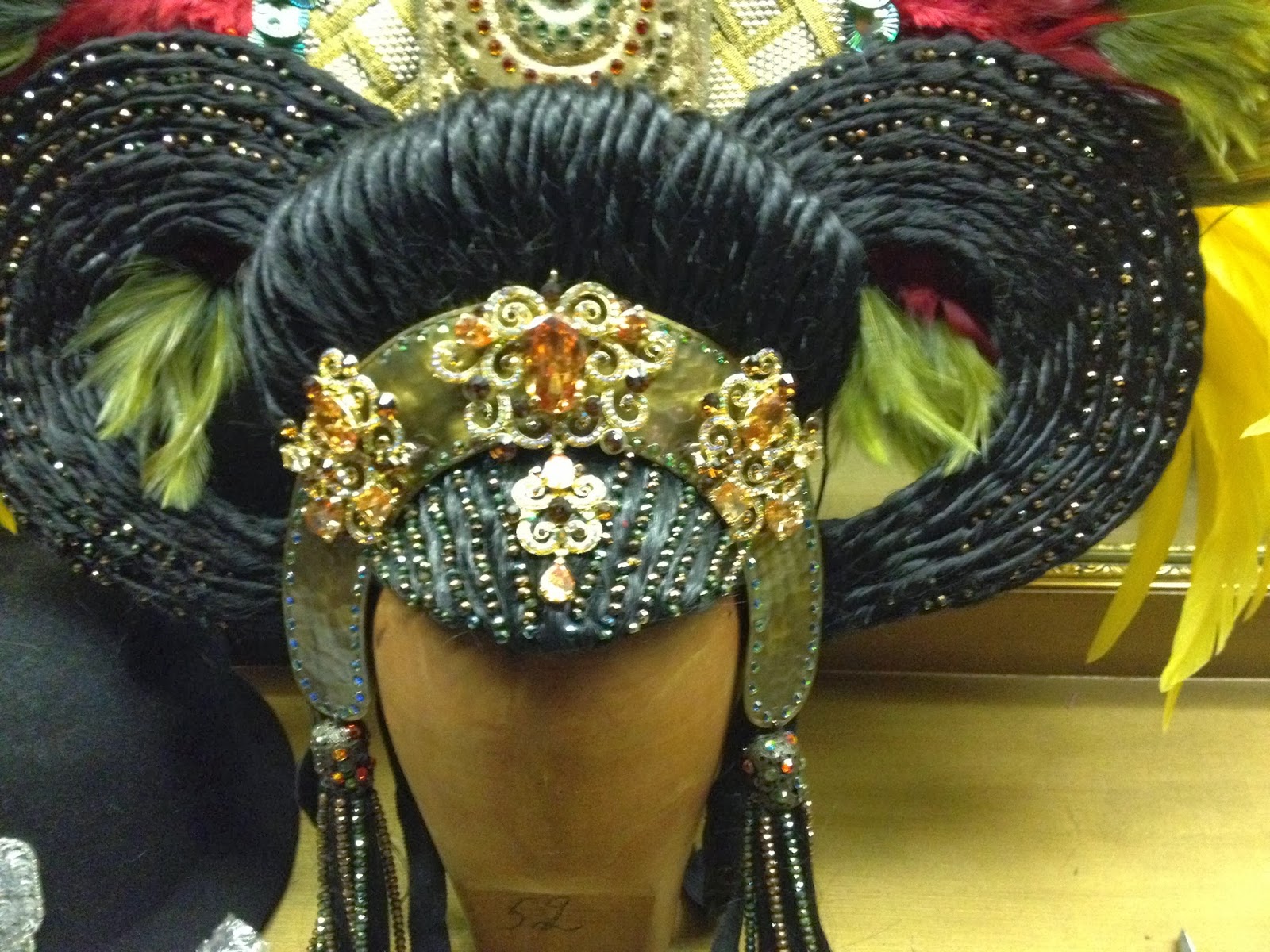 The side rolls and the bun-dish thing on top are also fake hair (yes, it was pain in the a** to make :)
All hand sewn from individual bunches of hair. There are also swarovski beads sewn at the adges. 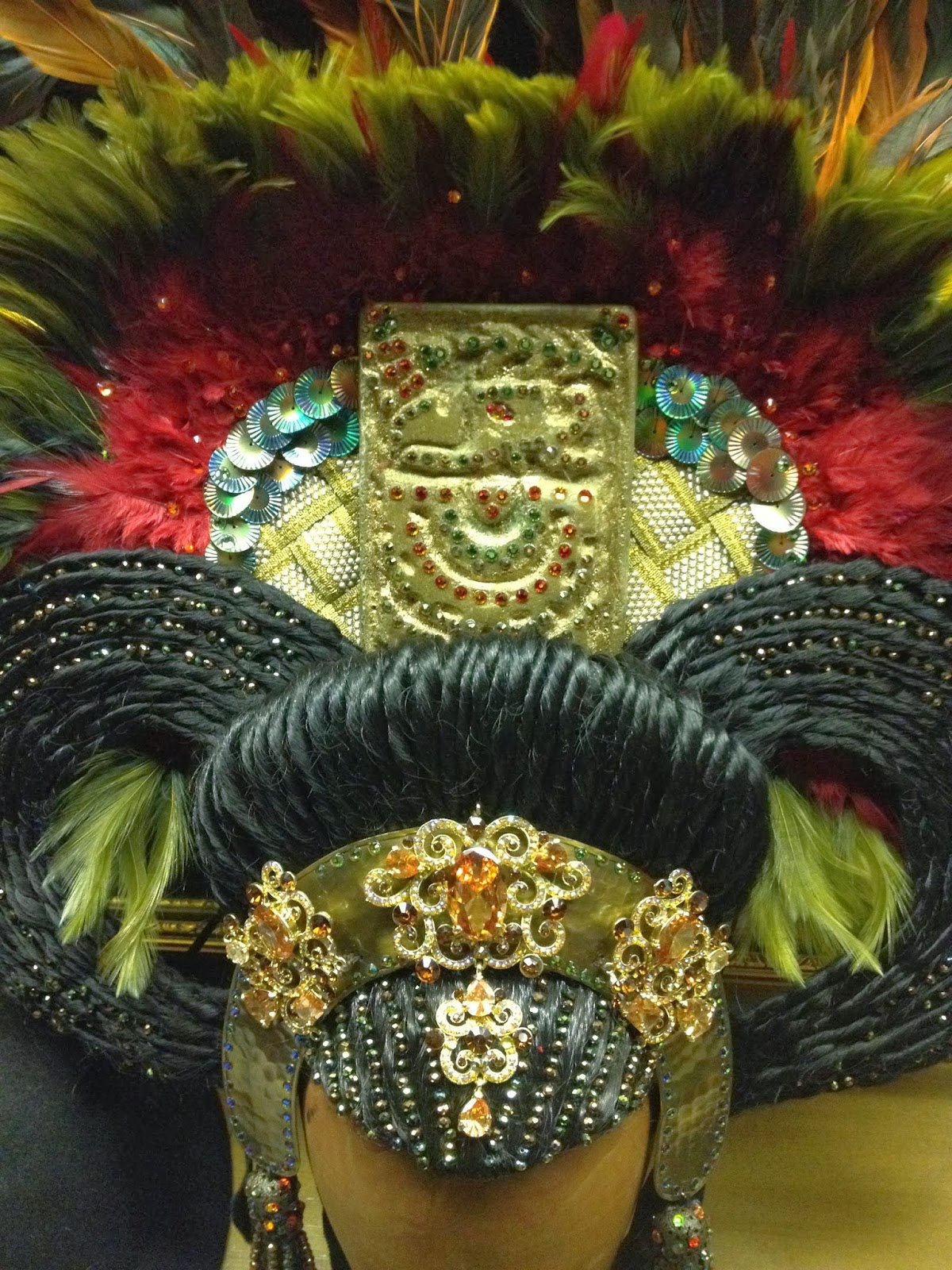 The golden plate is made of resin. I carved the model out of wood and made a silicone mold of it and then made a resin cast, painted it with gold paint and covered with swarovski crystals. The plate is attached to bucram base that it covered with a web of vintage gold/white ribbon, sequins, swarovski and trimmed with two kinds of feathers. 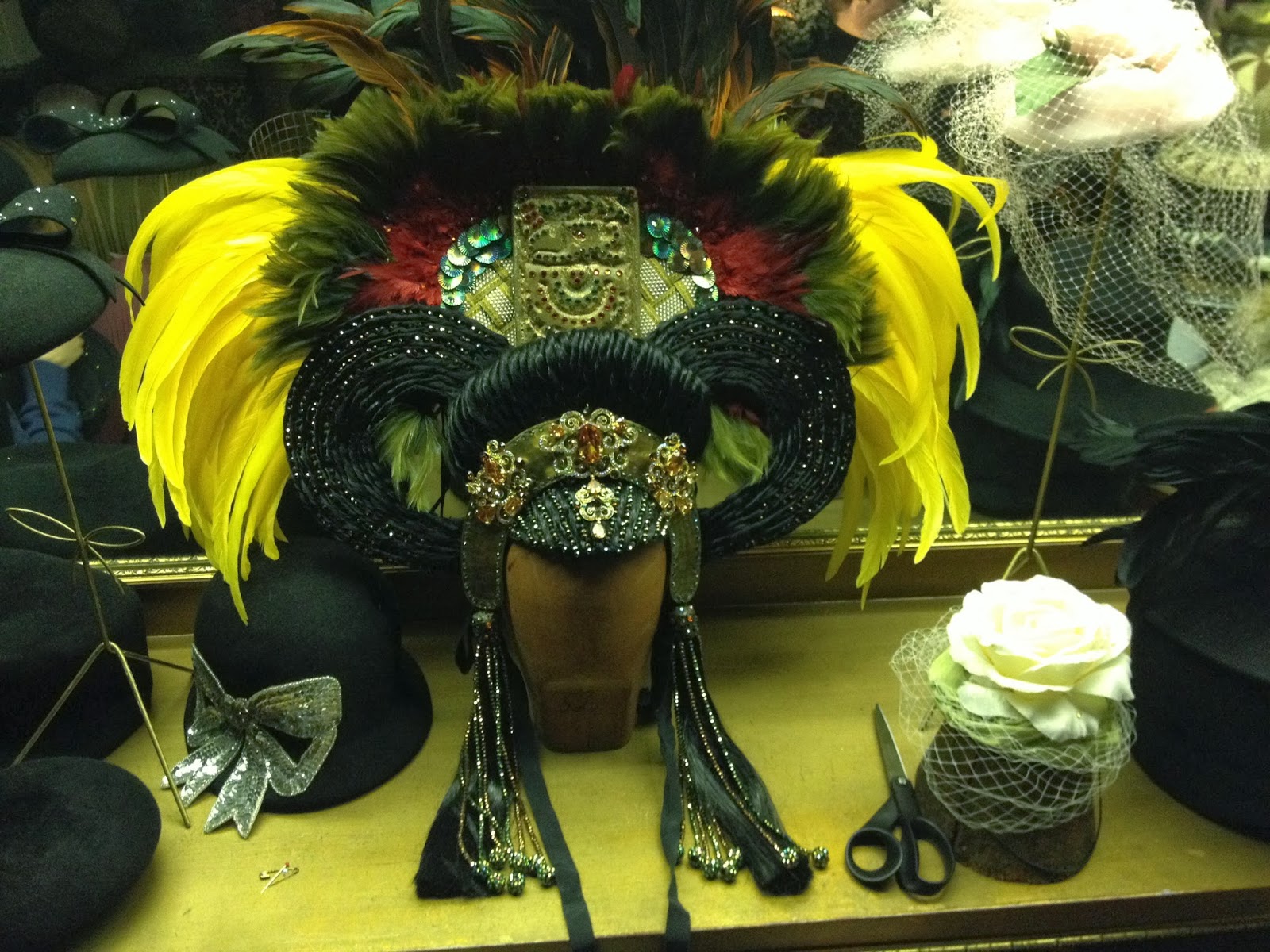 There are also longer orange/black feathers on top and yellow feathers on the side (detachable) and green very long  detachable pheasant feathers, that are seen in the picture below.
The headdress is collapsible because it has to fit in a suitcase (it actually goes in four pieces+ the green feathers). It also had to be sturdy and stay on LouLou's head while she is dancing (everyone who has seen her perform knows that she is WILD on stage), yet it can not be too heavy or uncomfortable. It also have to be really easy to remove (in about 30sec.) And ofcourse it has to look good and be fierce...


This baby is all that. And what's most important, LouLou was happy with it. There is nothing better than a happy customer!

So, that is why my headresses are "so expensive". The burlesque pieces start around 300, but something as big and complicated as this is not hundreds, it's thousands..
I practically made everything on this headdress, this is really made from scratch. Just the materials were several hundreds of euros and the amount of hours i spent making this is quite something.

I make all my headpieces with love, they are unique and made to last and i use the best materials at hand and order lots of stuff from all around the world to get the best stuff.

I have to say that i truly love my job and my customers who make me do these crazy projects! The mutual respect, the joy of working with such talented and nice people. I must be the luckiest girl in the world, though it took me years to be where i am now and lots of work. 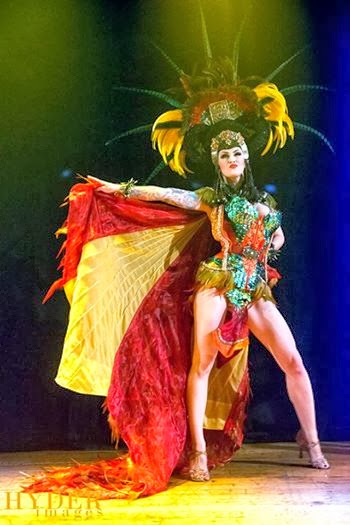 You can comment in English, tai suomeksi. Of just for fun, in deutsch! 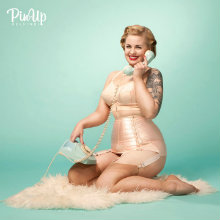 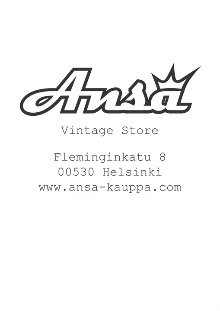 "Champagne for my real friends and real pain for my sham friends."

"If you want to see the girl next door, go next door."

"And the opportunity to look truly wicked. Isn't it worth it as long as you look wicked and feel good?"

"Imperfection is beauty, madness is genius and it's better to be absolutely ridiculous than absolutely boring." 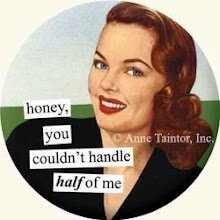 Books! I read every day.

Most of the pictures are taken by me. If i'm using pictures taken by someone else, i'll mention the photographer (if known) and the original source. If you feel that i have violated your copyrights, please contact me and i'll remove the pic.
If you want to use my photos or other content from my blog, link back to me.